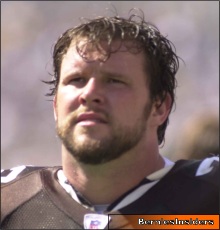 According to broadcast reports, Cleveland Browns offensive tackle Ryan Tucker has violated the NFL’s substance abuse policy by testing positive for steroids. As a result, Tucker has been suspended by the NFL for the first four games of the 2007 regular season.The reported steroid violation isn’t Tucker’s first off-the-field problem. The 10-year veteran missed the final seven games of the 2006 season while battling an undisclosed mental disorder.

With Tucker set to miss the beginning of the season, it is expected that Browns’ 2007 #1 pick Joe Thomas will start at left tackle while the current left tackle, Kevin Shaffer, will slide over to right tackle and replace Tucker.

Hickerson To Be Inducted
Bentley on the Practice Field Watching, Knee 70 Percent