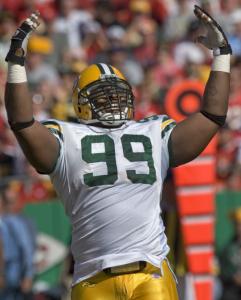 As has been the case the past few seasons, the Browns are usually quick to strike in the free agent market, but reports are coming in right now that state their first move to upgrade this offseason is going to come via trade.  Washington Post writer Jason La Canfora is reporting the following about a move the Browns are going to make with the Packers:

“Corey Williams has been traded to Cleveland – it will be announced come midnight, sources said.”

“Someone is going to trade for him,” said a source on SportingNews.com about Williams. “It’s going to happen. He’s not going to play for Green Bay. I’m telling you he’s gone. The first day — he’s gone.”  With the lack of quality DT’s out there in free agency, and Williams likely the best, it’s a win-win for both teams.  The Browns get a quality DT, and the Packers get a first day pick and won’t have to absorb his salary.

Williams is 6-foot-4 and 313 pounds.  He can play both the 3-technique position and nose tackle. He is better than average against the run and had seven sacks in each of the last two seasons.  So if the story from the Post is true, give the Browns and Packers both a kudos for working out a deal that gets the free agency period off to a rousing start.

Browns to Be Minus Tight End Austin Hooper Against Baltimore

Roye Released; How Tough Will it Be to Sign Anderson
QB Anderson Officially Hits the Market