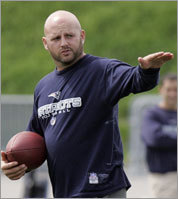 The Browns have officially announced the hiring of the three main assistants of new coach Eric Mangini’s staff. The team has brought in Brian Daboll as the new offensive coordinator, Rob Ryan as the defensive coordinator and Brad Seely as special teams coach.

“I am extremely pleased to bring three quality people in Brian, Rob and Brad to our coaching staff and to the Cleveland Browns organization. I know firsthand that all three are very experienced, talented and dedicated coaches who share the same team-first vision and are passionate towards our goal of bringing an NFL championship to Cleveland,” Mangini said in a presser.

Daboll began his NFL coaching career with the New England Patriots as a defensive coaching assistant in 2000 before being promoted to wide receivers coach for the Patriots in 2002. After the 2006 season, he left the Patriots to serve as the Jets’ quarterbacks coach.

Ryan was with the Raiders as their defensive coordinator from 2004 to this last season. The Raiders D this past season gave up 360 yards per game and over 24 points.